Analysis of Procurements and the supply chain

The information and data presented in the paragraph in an aggregated manner are managed centrally and concern all companies included in the scope – see Disclosing sustainability: Methodological note – with the exception of Gesesa and Gori, whose data, where available, are displayed in a non-aggregated manner. This guarantees full comparability with data from the previous year.

Tenders for the supply of goods, the performance of services and the completion of works, for the companies included in the reporting – with the exception of Gesesa and Gori84 – were managed at a centralized level. As initially mentioned, contracts awarded during the year had a comprehensive financial value of approximately € 1.2 billion85, 23% more than the 974 million in the previous year. The absolute values of the items goods and services increased compared to 2018, while works decreased (see table no. 34).

CHART NO. 29 – VALUE OF PROCUREMENT OF GOODS, SERVICES AND WORKS AND PERCENTAGE ON TOTAL (2019) 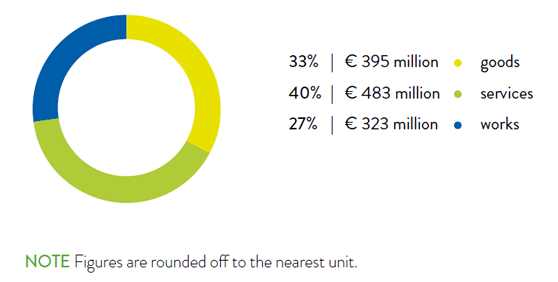 Analysing the procurement values for the business macro areas –Energy Infrastructure (generation and networks), Commercial and Trading (sales and call centres), Water (including Acea Elabori, for services provided to the sector), Environment (waste-to-energy and environmental services) and Corporate (Acea SpA) – the largest changes compared to the previous year were recorded for the Water segment (+49%), to be correlated in particular with the increase in orders for “works”, and for Commercial and Trading (+150%), for “goods and services” orders. The largest percentage of total procurements is related to the Water (38%) and Energy Infrastructure (32%) segments (see chart no. 30 and table no. 34).

The Group Companies included in the scope of consolidation made a total of 2,843 Purchase Orders, about 30% more than last year (2,195 Orders), involving 1,462 suppliers (1,151 in 2018). More than 89% of Purchase Orders for goods and services were below the EU threshold. The top ten works suppliers accounted for more than 49% of the total value of the contracted works, while the top ten suppliers of goods and services respectively accounted for around 62% and 36% of the related total values procured (see table no. 35).
The increase in the total number of suppliers in 2019 – more than 300 more than 2018 – took place in a proportionate manner geographically, both for macro regions and focusing on Lazio. The geographical distribution of the suppliers was in line with previous years, with about 90% being concentrated in the macro areas of central and northern Italy, and the incidence of suppliers in Lazio remains consistent and equal to 45% of the total (the same figure for 2018, see table no. 35).
The most significant changes with regard to the geographical distribution of the value of procurements among the macro-regions, in terms of percentage of the total amounts (878 million for goods and services and 323 million for works) were recorded as decreases for the northern area and increases for the central Italy area for both the “goods and services” and works. During the year around 44% of the value of “goods and services” and around 75% of the value of “works” were concentrated in Lazio (table no. 35).

CHART NO. 31 – GEOGRAPHICAL DISTRIBUTION OF THE AMOUNTS USED FOR THE PURCHASE OF GOODS AND SERVICES IN ITALY AND ABROAD (2019)

CHART NO. 32 – GEOGRAPHICAL DISTRIBUTION OF THE AMOUNTS OF WORKS AWARDED IN ITALY AND ABROAD (2019)

The companies Gori and Gesesa, operating in the water sector in Campania, managed their procurements for the year independently, so the data presented here is not in aggregate form. More specifically, the value of Gori’s 2019 procurements was equal to a total of approximately € 75 million (6 million for the procurement of goods, 66 million for services and 3 million for works), for a total of 1,068 Purchase Orders managed. Regarding Gesesa, 2019 procurements totalled approximately € 12 million (5 million for goods, 2 million for services and 5 million for works), up approximately 50% compared to the previous year (8 million in 2018), for a total of 756 Purchase Orders managed. Total procurements of Gesesa involved 186 suppliers, more than 70% of which concentrated in southern Italy and the islands, while 1% abroad, 14% in central Italy and 15% in northern Italy. This concentration, the effect of a natural proximity of operations to the local region, is also reflected in the percentage distribution of the amounts of goods and services and works, also focused in the southern Italy and islands area, for about 66% and about 78% respectively.

NOTE All the figures in the table are rounded off to the nearest unit. The data of Gori and Gesesa are not included. Where available, they are presented in the text. Acea Elabori, organizationally part of the Engineering and services area, was incorporated in the Water area in the table, for the services it carries out for the sector.

NOTE All the figures in the table are rounded off to the nearest unit. The data of Gori and Gesesa are not included. Where available, they are presented in the text. The “northern Italy” geographical area includes Valle d’Aosta, Piedmont, Lombardy, Veneto, Trentino-Alto Adige, Friuli Venezia Giulia, Emilia-Romagna and Liguria; “central Italy” includes Tuscany, Umbria, Marche, Lazio, Abruzzo and Molise; “southern Italy and islands” includes Campania, Basilicata, Apulia, Calabria, Sicily and Sardinia. The geographical location “foreign”, active in 2019 only for the item “goods and services”, includes suppliers that are mainly European.

84 The data relating to the supply of the companies operating in the water sector Gori and Gesesa, managed independently by the Companies, are not present in the analysis of the aggregated data, but are reported later in the chapter.
85 The amount refers to tenders awarded during the year, without any distinction between investments and operating cost, annual and multi-annual contracts. Purchases of commodities, regularisation orders and intercompany orders are excluded.